Meet the team of Seasons Veterinary Clinic! We are proud to offer you exceptional veterinary care for your pets. Please call us at 204-477-1293 to speak to one of our team members. 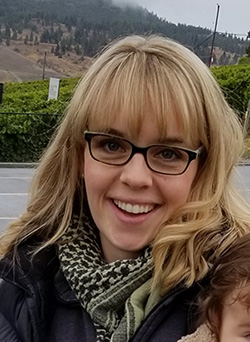 Bronwyn was born and raised in a number of remote locations throughout British Columbia, mostly on a small family farm in the north. And it was here that her dream of becoming a veterinarian was born. Bronwyn went on to do an undergraduate degree in Animal Science at the University of Saskatchewan, and then Veterinary Medicine, also in Saskatoon, graduating in 2012. It was here she met her future husband, Leigh and together they moved around Alberta and Saskatchewan, making many wonderful friends along the way, often former clients. In 2017 they decided to follow family to Winnipeg to raise their children and pursue their dream of opening their own veterinary practice.

Bronwyn enjoys all aspects of veterinary medicine as her love is assisting her clients in the care of their pets, something every part of the job presents. She has a special focus in helping her clients work through the difficult end-of-life discussions that come with every beloved pet.

She would be very happy to meet you and show you around her practice, Seasons Veterinary Clinic! 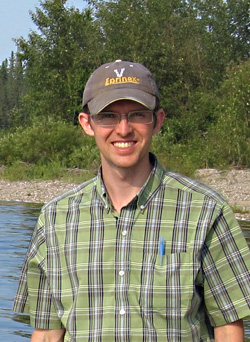 Leigh is a second generation veterinarian, following in his father, Dr. Rob Chisholm’s big footsteps. He was raised on his family’s cattle ranch in the Porcupine hills of Alberta, near Claresholm. As a child, it was watching his father, a very respected and talented veterinarian, which inspired Leigh to pursue the same career. Leigh completed his undergraduate degree in zoology at the University of Calgary in 2008, and went on to study veterinary medicine at the Western College of Veterinary Medicine in Saskatoon, meeting his wife, Bronwyn, there. They graduated together in 2012.

After practicing in both Alberta and Saskatchewan, Leigh and Bronwyn moved to Winnipeg and started working on their dream of opening a practice of their own.

Leigh enjoys all the challenges veterinary medicine presents, and he has a particular interest in surgery and dentistry, and has pursued additional training in this field. Leigh would be honoured to give you a tour of his practice, and discuss any concerns you might have for your pet! 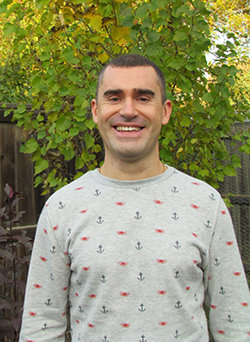 Vitalii, a second generation veterinarian, was born and raised in Ukraine. As a young child, Vitalii helped his father often, watching closely all he did. It was his father’s example as a highly respected veterinarian that inspired Vitalii to follow in his footsteps.

Vitalii completed Veterinary School in 2013, and then embarked on adventures that took him throughout Europe, and finally to Canada in 2017 where he was excited to advance his career in this beautiful country.

Vitalii enjoys all aspects of veterinary medicine, and looks forward to meeting you and your pet at Seasons Veterinary Clinic! 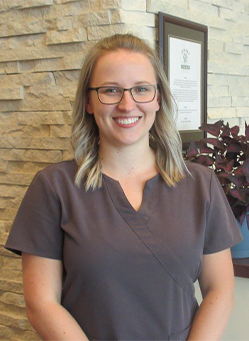 Melissa is a Registered Veterinary Technologist who has wanted to work with animals her entire life. Melissa started at Seasons Veterinary Clinic when she was in her first year of the RRC RVT program in 2019, and has worked up to being the Lead RVT at our practice. Melissa enjoys an active lifestyle and playing with her adorable kitten, Luna, and Siamese cat, Lily. Melissa is very excited to meet you and your pet! 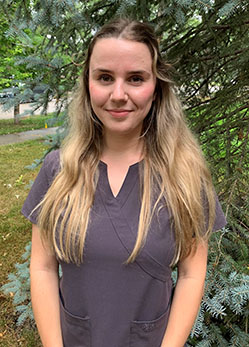 Julia was born and raised in Manitoba and has always had a passion for animals and nature. She graduated with a Bachelor of Science in 2015, and recently graduated as a Registered Veterinary Technologist from Red River College in 2021. Julia is enjoying all the many and varied aspects this exciting career brings. When not working, she enjoys spending time with friends and family, camping, and spending time with her cat, Possum.

Kendall graduated as a registered veterinary technologist from Red River College in 2012, and after 2 years working in Winnipeg, both in general practice and emergency medicine, has spent the last 6 years working in Calgary, AB. Kendall enjoys photography, and spends her spare time with her cat Beastie, and training/doing agility with her dog Senna.

Kendall brings with her a wealth of experience and talents, and is keen to share this knowledge and passion for pet care with you and your furry family.

Alla was born and raised in Ukraine and was passionate from an early age about Medicine. Growing up on a farm allowed Alla to spend time with animals, leading her to pursue Veterinary Medicine as her dream profession.

In 2020 Alla graduated as a Doctor of Veterinary Medicine from Zhytomyr National Agroecological University, and embarked upon clinical practice for the next 2 year.

In 2022 she came to Canada looking to advance her career and dream of being a veterinarian in Canada. Alla joined the team at Seasons Veterinary Clinic shortly after her arrival in Winnipeg, and provides tremendous support and dedication to the clients and patients we serve as a Veterinary Assistant, while she works through the rigorous process of becoming licenced as a veterinarian in Canada.

Stephanie, raised in a military family, has moved throughout Eastern Canada but has called Winnipeg home for the past many years. One constant in Stephanie’s life has been the large variety of pets that have helped to grow her love for all animals. Stephanie’s ever-expanding pet-family currently includes a Mexican Black Kingsnake, a planted Fish tank, and “Ajax”, a beautiful Maine-Coone mix. Stephanie is currently studying to become a Registered Veterinary Technologist, and is looking forward to being able to help you and your pets even more in the future! 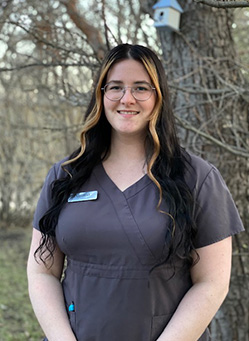 Mishai was born and raised in a small town in Northern Manitoba. Growing up surrounded by the beauty of the Canadian Shield is where her true passion for animals and nature began. This passion has given her experience with a variety of over 20 different species of animals. In 2011, Mishai adopted her beloved Rhodesian Ridgeback mix named Sieka, with whom she loves spending time exploring nature.

Mishai looks forward to meeting you, and your pet at Seasons Veterinary Clinic. 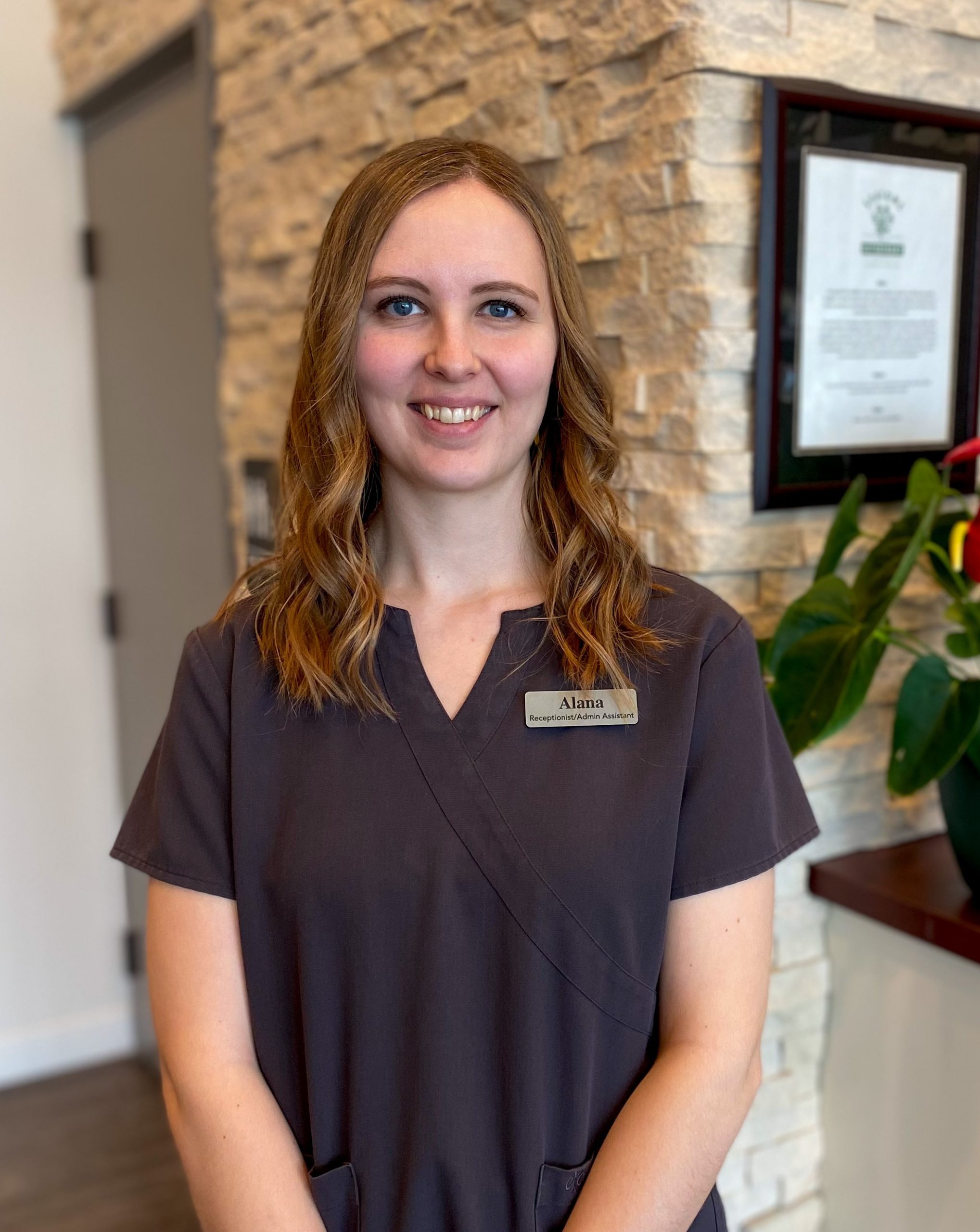 Alana grew up in Winnipeg and has always had a love for animals. She is passionate about music and enjoys to sing and play guitar in her free time. Alana also runs a small macrame business on the side, and she enjoys participating in craft shows and markets.

Alana is looking forward to meeting you and your furry friends! Kateryna was born and raised in Ukraine, working in a number of Human Resource position, as well as customer service through her career there. Kateryna moved to Canada in 2022 to make a fresh start, and joined the team at Seasons shortly after arriving. She enjoys working with people, and has a deep interest in psychology. She adores animals, and has a lovely 6 year old cat, Orange, who has traveled a lot with his owners.
Kateryna is looking forward to providing you and your pets with the best care in our clinic!